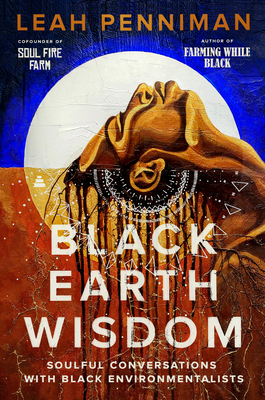 A soulful collection of illuminating essays and interviews that explore Black people’s spiritual and scientific connection to the land, waters, and climate, curated by the acclaimed author of Farming While Black

Author of Farming While Black and co-founder of Soul Fire Farm, Leah Penniman reminds us that ecological humility is an intrinsic part of Black cultural heritage. While racial capitalism has attempted to sever our connection to the sacred earth for 400 years, Black people have long seen the land and water as family and understood the intrinsic value of nature.

This thought-provoking anthology brings together today’s most respected and influential Black environmentalist voices —leaders who have cultivated the skill of listening to the Earth —to share the lessons they have learned. These varied and distinguished experts include Pulitzer Prize and National Book Award-winning author Alice Walker; the first Queen Mother and official spokesperson for the Gullah/Geechee Nation, Queen Quet; marine biologist, policy expert, and founder and president of Ocean Collectiv, Dr. Ayana Elizabeth Johnson; and the Executive Director of the North Carolina Association of Black Lawyers, Land Loss Prevention Project, Savi Horne. In Black Earth Wisdom, they address the essential connection between nature and our survival and how runaway consumption and corporate insatiability are harming the earth and every facet of American society, engendering racial violence, food apartheid, and climate injustice.

Those whose skin is the color of soil are reviving their ancestral and ancient practice of listening to the earth for guidance. Penniman makes clear that the fight for racial and environmental justice demands that people put our planet first and defer to nature as our ultimate teacher.

Leah Penniman (li/she/ya/elle) is a Black Kreyol farmer/peyizan, mother, soil nerd, author, food justice activist, and cofounder of Soul Fire Farm in Grafton, New York. She has been farming for more than twenty-five years, holds an MA in Science Education and a BA in Environmental Science and International Development from Clark University, and is a member of clergy in West African Indigenous Orisa tradition. Her first book, Farming While Black: Soul Fire Farm’s Practical Guide to Liberation on the Land, is a love song for the land and her people.

"A moving and powerful how-to book for Black farmers to reclaim the occupation and the contributions of the BIPOC community that introduced sustainable agriculture." — Book Riot on Farming While Black

“Provides practical tools along with a beautiful visionary template for practicing land development that is rooted in healing and transformation.”  — Patrisse Khan-Cullors on Farming While Black

"Leah Penniman is . . . opening the door for the next generation of farmers." — CBS This Morning on Farming While Black

“Leah is truly changing our food system, one bite at a time.”  — PBS on Farming While Black

“A guidebook to dismantle systemic racism.”  — Civil Eats on Farming While Black

“Penniman is part of a growing movement to reclaim Black farmers’ hard-won place in our country’s agriculture.”  — Mother Jones on Farming While Black

“What I find so important about the work that [Penniman does] is that it’s reconnecting things that were torn asunder [and] challenging assumptions.”  — Food & Wine on Farming While Black