Mathematics for the Nonmathematician (Dover Books on Mathematics) (Paperback) 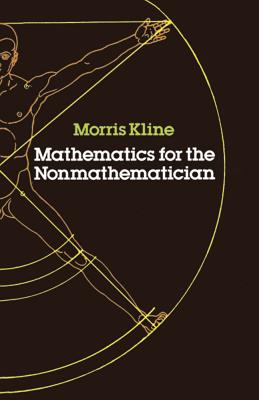 Mathematics for the Nonmathematician (Dover Books on Mathematics) (Paperback)


Usually Ships in 1-5 Days
Practical, scientific, philosophical, and artistic problems have caused men to investigate mathematics. But there is one other motive which is as strong as any of these -- the search for beauty. Mathematics is an art, and as such affords the pleasures which all the arts afford. In this erudite, entertaining college-level text, Morris Kline, Professor Emeritus of Mathematics at New York University, provides the liberal arts student with a detailed treatment of mathematics in a cultural and historical context. The book can also act as a self-study vehicle for advanced high school students and laymen.
Professor Kline begins with an overview, tracing the development of mathematics to the ancient Greeks, and following its evolution through the Middle Ages and the Renaissance to the present day. Subsequent chapters focus on specific subject areas, such as Logic and Mathematics, Number: The Fundamental Concept, Parametric Equations and Curvilinear Motion, The Differential Calculus, and The Theory of Probability. Each of these sections offers a step-by-step explanation of concepts and then tests the student's understanding with exercises and problems. At the same time, these concepts are linked to pure and applied science, engineering, philosophy, the social sciences or even the arts.
In one section, Professor Kline discusses non-Euclidean geometry, ranking it with evolution as one of the two concepts which have most profoundly revolutionized our intellectual development since the nineteenth century. His lucid treatment of this difficult subject starts in the 1800s with the pioneering work of Gauss, Lobachevsky, Bolyai and Riemann, and moves forward to the theory of relativity, explaining the mathematical, scientific and philosophical aspects of this pivotal breakthrough. Mathematics for the Nonmathematician exemplifies Morris Kline's rare ability to simplify complex subjects for the nonspecialist.
Morris Kline: Mathematics for the Masses Morris Kline (1908-1992) had a strong and forceful personality which he brought both to his position as Professor at New York University from 1952 until his retirement in 1975, and to his role as the driving force behind Dover's mathematics reprint program for even longer, from the 1950s until just a few years before his death. Professor Kline was the main reviewer of books in mathematics during those years, filling many file drawers with incisive, perceptive, and always handwritten comments and recommendations, pro or con. It was inevitable that he would imbue the Dover math program ― which he did so much to launch ― with his personal point of view that what mattered most was the quality of the books that were selected for reprinting and the point of view that stressed the importance of applications and the usefulness of mathematics. He urged that books should concentrate on demonstrating how mathematics could be used to solve problems in the real world, not solely for the creation of intellectual structures of theoretical interest to mathematicians only. Morris Kline was the author or editor of more than a dozen books, including Mathematics in Western Culture (Oxford, 1953), Mathematics: The Loss of Certainty (Oxford, 1980), and Mathematics and the Search for Knowledge (Oxford, 1985). His Calculus, An Intuitive and Physical Approach, first published in 1967 and reprinted by Dover in 1998, remains a widely used text, especially by readers interested in taking on the sometimes daunting task of studying the subject on their own. His 1985 Dover book, Mathematics for the Nonmathematician could reasonably be regarded as the ultimate math for liberal arts text and may have reached more readers over its long life than any other similarly directed text. In the Author's Own Words: Mathematics is the key to understanding and mastering our physical, social and biological worlds. Logic is the art of going wrong with confidence. Statistics: the mathematical theory of ignorance. A proof tells us where to concentrate our doubts. ― Morris Kline