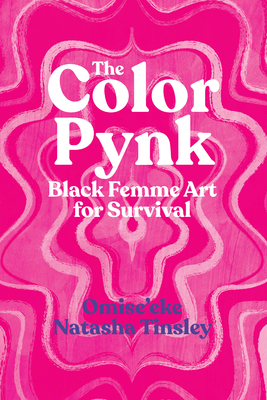 The Color Pynk is a passionate exploration of Black femme poetics of survival. Sidelined by liberal feminists and invisible to mainstream civil rights movements, Black femmes spent the Trump years doing what they so often do best: creating politically engaged art, entertainment, and ideas. In the first full-length study of Black queer, cis-, and trans-femininity, Omise’eke Natasha Tinsley argues that this creative work offers a distinctive challenge to power structures that limit how we color, gender, and explore freedom.

Tinsley engages 2017–2020 Black femme cultural production that colorfully and provocatively imagines freedom in the stark white face of its impossibility. Looking to the music of Janelle Monáe and Kelsey Lu, Janet Mock’s writing for the television show Pose, the fashion of Indya Moore and (F)empower, and the films of Tourmaline and Juliana Huxtable, as well as poetry and novels, The Color Pynk conceptualizes Black femme as a set of consciously, continually rescripted cultural and aesthetic practices that disrupts conventional meanings of race, gender, and sexuality. There is an exuberant defiance in queer Black femininity, Tinsley finds—so that Black femmes continue to love themselves wildly in a world that resists their joy.

Omise’eke Natasha Tinsley is a professor of Black studies at the University of California, Santa Barbara. She is the author of Beyoncé in Formation: Remixing Black Feminism, Thiefing Sugar: Eroticism between Women in Caribbean Literature, and Ezili's Mirrors: Imagining Black Queer Genders.

This is not just a book.  This is a function.  So the question is, what are you going to wear to this gathering? Omise'eke Tinsley gathers us once again, turning her brilliance to creative femmifestations of black femme fierceness in the so-called Trump Era.  (Or what I prefer to think of as the Tourmaline Ascendency.) Theorists, fashionistas, sweethearts, and innovators: we are all here in loving revelation.  I wear a quilted robe the color of a rose from my grandmother’s garden. I wear a hot-pynk, ribbed tank top screenprinted by a black lesbian yogi. I suggest you wear your curiousity, your vulnerability, and your desire to look like love.
— Alexis Pauline Gumbs, author of Undrowned: Black Feminist Lessons from Marine Mammals

"In The Color Pynk Omise’eke Natasha Tinsley pays homage to the foremothers of Black feminism by developing a Black femme reading practice.  Tinsley’s analyses of Black femme cultural production are rendered poetically and with the deft critical eye we have come to expect of her. Indeed, Tinsley’s is one of the most important voices of her generation."
— E. Patrick Johnson, Northwestern University, author of Honeypot: Black Southern Women Who Love Women